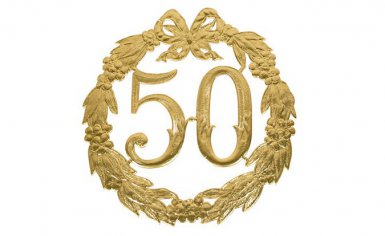 Fijnmechanische Industrie Goorsenberg B.V. celebrates its 50th anniversary on Monday 1 February 2016. Obviously we intend to celebrate this milestone in a fitting manner. We will organise anniversary events throughout 2016, starting with an anniversary lunch for our employees.

Harry Goorsenberg started to produce dies, clock components and metal goods in a workshop at his parent's home in Nijmegen in 1966. In 1970, the company, which now employed 4 people, relocated to a commercial unit behind a residential home on Winkelsteegseweg in Nijmegen. Computer-controlled machines started to be developed in this period. The first CNC turning machine was put into operation in 1977. This was a huge investment for a small company. However, Harry and his employees recognised the technical opportunities and rose to this challenge. The first CNC milling machine followed in 1978. Because the workshop was now too small and no space was available for expansion, Harry started to look for a new location. The company moved to the Westkanaaldijk industrial estate in Nijmegen in 1980 and has operated from this site ever since. At that time, the factory covered an area of approximately 400 m².

As the years passed, further investments were made in people tools and machines. In addition, the company decided to focus on producing precision-engineered components. The production of dies and moulds became a secondary line of business. In 1986, the factory was extended to 800m² and the neighbouring building (approximately 500m²) was purchased in 1989. This building was used as a warehouse. In 1990, the workforce had grown to approximately 16 employees. Machine programming was becoming ever more important.

A new generation of milling machines was purchased, leading to a reduction in order turnaround times. One machine was even modified to allow 5-axis machining tasks. This technology made it possible to produce extremely accurate products and gain a significant lead over competitors. More investments followed, including a computer-controlled 3D coordinate measuring machine and turning machines with driven tools.

In 2006 , the offices were extended by adding an extra floor, completely modernising the building's front façade. The floors, walls and ceilings, sanitary equipment and plumbing were renewed throughout the factory building. In 2009, Harry and Jeannette Goorsenberg stepped down and their two sons, Raymond and Eric Goorsenberg, took over management of the company. A new 300 m² building was added in 2011. Currently, the company covers a total area of 2000 m² and continues to invest in new machines and production methods.

During the course of 50 years, this family company has become the partner you know today: a full-service supplier with short turnaround times, high delivery reliability and keen pricing!